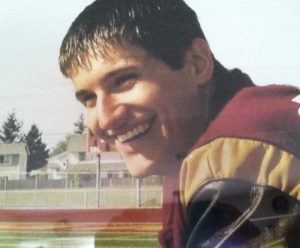 I will never forget that 4:00 AM phone call in September 2008—on what was the first day of school—telling me my son had been shot. I will never forget arriving at the hospital, the same hospital where my beautiful boy was born 20 years before, and finding out that a bullet killed my son.

The image of him lying on a cold metal slab, murdered, blackened eye, stripped of all clothes, and personality is forever embedded in my brain. My tall, athletic, smiling son, full of laughter and love, now gone forever. I will never forget telling Joshua’s brother that he would never see his brother again.

Joshua’s smile is amazing. It felt like the sun shining through the car window on a warm summer day. He had the cheesiest grin, told jokes, gave great hugs, and loved his family and friends. He always said hello, gave you a ride, cheered on his teammates even when he was finished racing, and could even be a prankster on occasion.

He loved trying new activities and loved sports. By 3rd grade he broke the mile record in his school and continued to run track from then on. He was MVP in his middle school and high school for track and made it to state in cross country. He was active in student government from middle school through high school.

Josh was attending St Martin’s University in Lacey, Washington on an academic and athletic scholarship. A gifted runner, Joshua’s name can still be found on the track record board nearly 11 years after his death.

One evening in September 2008, Josh was staying over at a friend’s apartment when he answered a knock at the door. During an attempted robbery, gunmen shot Joshua while forcing entry into his friend’s apartment. His friend was also shot but survived after surgery. Joshua was pronounced dead upon arrival at the hospital several hours after the horrific shooting.

When Joshua was 12 our family did a time capsule for New Year’s Eve. We wrote to our future wife, children, and grandchildren. We wrote what we wanted to do in the future. Joshua wrote that he wanted to be a star athlete, a millionaire, live by the sea, and help people when they needed it most.

We didn’t open this time capsule until after Joshua was gone. We just forgot about it while trying to manage the “new normal” after your child is murdered.

Joshua did become a star athlete—his name is still on the track record board at his university. He is rich by all the friends and family he knows—over 600 people showed up to his funeral and that speaks to his character and demeanor. He wanted to live by the sea and part of him does. Every time his story is shared, he is helping people when they need it most.

Even though it’s been nearly 11 years my heart still aches for my son. People have no idea what families endure in the aftermath of a gun death—the court process, trials, and sentencing. I wonder about the life he would have, the career, the family. I wonder about the kind of father he would be. Holidays, weddings, graduations, and everyday activities no longer hold the same meaning. Things I would do or say with my son are gone forever to bullets.

I will no longer stand by when there is more that we can do to help families, schools, and communities be safer from gun violence. This is why I speak out about gun sense legislation. We all deserve to live in a world free from gun violence.

My grandson, Edgar, was nicknamed Monkey because he loved to climb everything he could. He was fearless and extremely kind to everyone. He...