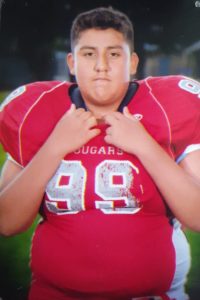 My grandson, Edgar, was nicknamed Monkey because he loved to climb everything he could. He was fearless and extremely kind to everyone. He had no enemies. He loved camping and going to Seahawks games with us. He loved comic book movies and he loved to play soccer and football. He was just 13 years old when he was killed.

October 14, 2017 started out like any other Saturday. Edgar had stayed the night at a friend’s house and the two boys were spending the day together.

But that morning, Edgar’s friend found a loaded, unsecured shotgun in the corner of his grandfather’s bedroom. He picked it up to play with it, as many kids might be tempted to do. The gun discharged, shooting Edgar in the chest and face and ending his short life in an instant.

Edgar’s friend, who was also just 13 years old, was sentenced to five months in juvenile custody and charged with second-degree manslaughter for this tragic accident. The boy’s grandfather—the adult who irresponsibly left his gun loaded, with the safety off, and easily accessible to anyone—faced no charges at all.

During the trial, he testified that he had told his grandchildren not to touch his gun. But he took no further steps to keep them from accessing his gun. No child should be killed for their curiosity.

Before Edgar was killed, I didn’t realize gun owners could be so negligent about child safety. I was astounded to learn that eight children are unintentionally shot every day in America. I also wasn’t aware that in Washington state, almost nothing could be done to hold gun owners accountable for irresponsibly storing their firearms.

Initiative 1639 changed that. The comprehensive gun violence prevention measure, which passed in 2018 with nearly 60 percent of the vote, incentivizes people to securely store their firearms by holding irresponsible gun owners accountable if a child or other legally prohibited person accesses and uses their gun to cause harm.

If Initiative 1639 had been in place in 2017, and that gun had been safely stored, my grandson would still be alive today. This law can’t bring Edgar back, but it will help prevent another family from experiencing the senseless tragedy that mine did.

–Carla is Edgar’s grandmother and an Alliance for Gun Responsibility volunteer.

I was 43 years old when I was shocked to find myself flat on my stomach with my arms around my head, waiting for the gunshot that would...