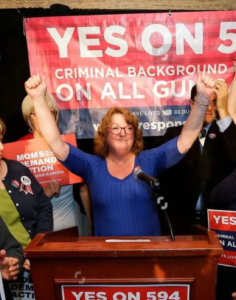 I was 43 years old when I was shocked to find myself flat on my stomach with my arms around my head, waiting for the gunshot that would kill me.

I couldn’t hear anything but an overwhelming ringing in my ears. I couldn’t see anything because my face was pressed to the floor of my office in the Jewish Federation of Greater Seattle.

But I could smell—and to this day, the smell of industrial carpet is the smell of waiting to die at any second.

On that beautiful summer afternoon in July 2006, I’d been expecting the arrival of my cheerful 14-year-old niece, Kelsey, who was meeting me at the office for a ride home after her art class. Instead, an armed stranger showed up in the hallway outside of my office, shouting angry, ugly words about Israel and Jews.

When the ringing in my ears started fading and was replaced by the cries of my wounded colleagues, my first thought was, “Be quiet! He might come back!” My next immediate thought was, “Oh my god, Kelsey. I have to get out and stop Kelsey from walking into the building!”

I didn’t see Kelsey until I woke up in the hospital a week later from a medically induced coma.

I was in the hospital for six weeks. During that time, I learned that my colleague Pam was killed in the shooting, and that four other colleagues were in the hospital with me. I found out the shooter had held a 9mm Glock handgun against my side and fired a hollow-point bullet that exploded as it tore through my abdominal organs.

I underwent 20 surgeries: about one surgery every two months for three years.

I testified at the shooter’s two trials, and saw him sentenced to life plus 120 years, without the possibility of parole.

And almost every day, there was another shooting in the news: on the TV screen in my living room, in the newspaper as I ate my breakfast, and on the radio as I drove to work. There were more deaths and horrific wounds, more families and communities torn apart, and more grieving. And in the face of this senseless violence, there were elected officials doing nothing, over and over again.

When I’d had enough—when I was ready to learn how to become an advocate for gun violence prevention—there weren’t many organizations around. The existing organizations turned me away when I asked to volunteer, refusing to even hear me out. They told me they didn’t work with survivors, that we’re “too fragile.”

I am ANYTHING but fragile.

When Moms Demand Action and the Alliance emerged, I signed up, even though I was afraid I’d be turned away again. But I wasn’t. Instead, I was asked to be the Citizen Sponsor of Washington State’s Initiative 594, a background check ballot initiative which passed with 59 percent of the statewide vote in 2014.

Our momentum is building. As the nation sees our collective grief, survivors of every type of gun violence are stepping up, speaking up, and demanding action. We finally have gun responsibility majorities in both the Washington State Legislature and the US House of Representatives (including my friend and former Everytown colleague, Rep. Lucy McBath, GA-06).

I now work full-time for the Everytown Survivor Network, training other survivors how to share their stories effectively to inspire action. This has been a huge journey for me—triumphing over the daily physical pain and the emotional pain that comes and goes—to keep moving this important work forward.

–Cheryl Stumbo was the citizen Sponsor of I-594 and is a GVP advocate with the Alliance and Everytown Survivor Network.

Veronika Weiss was born at Swedish Hospital in Seattle on February 24, 1995. Despite loving our cloudy, rainy weather, the Seahawks,...