What to know about domestic violence and guns in 2022

October marked the start of Domestic Violence Awareness Month here in the United States and it is undeniably linked with gun violence. Domestic violence can impact any of us, but it disproportionately affects women, specifically women of color. 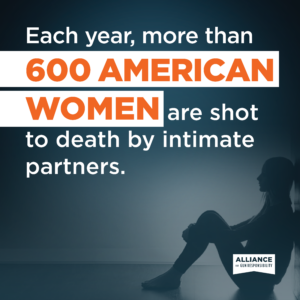 Each year, more than 600 American women are shot to death by intimate partners. That equates to one death every 14 hours. Access to firearms increases the life-threatening impacts of domestic violence. When an abusive partner has access to a firearm, it is five times more likely that the survivor will be killed.

Domestic violence–often referred to as intimate partner violence–is not just physical violence, but rather any behavior intended to hold power or control over a spouse, partner, or intimate family member. Abuse is a learned behavior; it’s not caused by anger, mental health diagnoses, substance abuse, or other commonly mistaken connections.

A few of the most common ways abusers control victims can include but are not limited to:

Firearms and domestic violence are a deadly combination: guns are used to commit over half of all domestic homicides. Guns are also often used as tools of intimidation or coercion. There are close to 1 million w 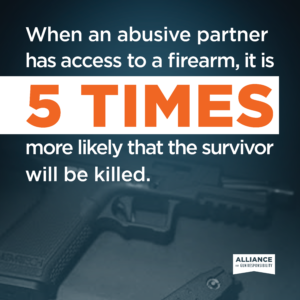 omen alive today who have reported either being shot or shot at by an intimate partner. And far too often individuals with a history of gun violence against an intimate partner go on to take the lives of family members, friends, and responding officers. There is a troubling connection between domestic violence and mass shootings: Since 2009, ​​nearly three in four children and teens killed in mass shootings have died in domestic violence-related incidents.

Pandemic-induced social isolation, financial hardship, and uncertainty have increased the threat of domestic violence. And homicides spiked in the last two years nationally and locally, driven in many cases by an increase in domestic violence homicides. 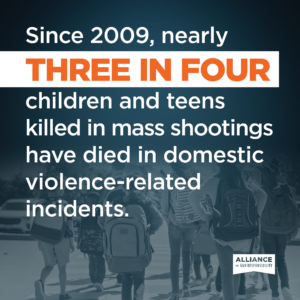 These realities are triggering, heartbreaking, and immensely painful to hold, but we are not powerless in the face of this violence. Washington state has implemented the strongest legal measures in the country to disarm abusers and prevent gun violence, and there are early signs that that progress is saving lives. In 2021, domestic violence homicides fell in Washington state, bucking national trends. This promising change is attributable at

least in part to the significant advances made to both strengthen and improve the state’s protection order system.

Of course, a one-year decline does not mean our work is over. There is so much left to ensure that our existing laws are implemented effectively and working as promised to disarm domestic violence and save lives.

Learn more about the policy changes Washington has made and visit Disarm Domestic Violence to expand your awareness and locate resources.

If you or someone you love is experiencing domestic violence, you can call the National Domestic Violence Hotline at 1-800-799-7233, which is available 24/7, and provides confidential assistance from trained advocates.

— Tori Muzyk is Digital Communications Manager at the Alliance.

Highlighting Washington’s progress addressing the intersection of domestic violence and firearms in recognition of National Domestic...