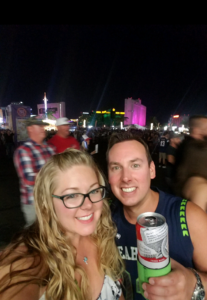 I am deeply passionate about music. I have been to around 500 concerts in my lifetime. I have many memories, including my first concert, Candlebox, at 16 years old. However, the most memorable concert of my life is the one where I was shot.

My girlfriend, Thomi and I were having a blast at the three-day Route 91 Harvest festival at the Las Vegas Village concert in October 2017. While Jason Aldean was playing his set, we heard a “pop pop pop” that turned into a steady loud crackling. I turned to Thomi and said, “that sounds like a fucking machine gun,” but still did not comprehend what was happening. It wasn’t until we saw the band run off stage that we knew we were in big trouble.

We grabbed each other’s hands and took cover by a trash can, incorrectly assuming that the shooting was coming from ground level instead of 32 floors above us. We laid on our bellies for around 5 minutes as people ran and screamed everywhere we looked.

Getting shot feels like you think it would – it hurts like hell. What really surprised me was the wetness that I felt. I reached my hand back to feel my leg and when I pulled it up in front of my face it was completely covered in blood. I told Thomi that I got hit and was bleeding pretty badly. I did not know if I could put any weight on my leg, but I knew we couldn’t stay there any longer.

We had come to recognize the 10-15 second breaks between reloads, and agreed to make a run for it during the next lull.

We climbed over a barricade and ran for our lives. Thomi lost her flip flops and ran barefoot. She stopped to wait for me as I was limping badly, but I yelled at her to keep running.

We made it out that night, but 58 others did not.

I still have the bullet fragment in my leg, which is now encased in scar tissue like a cocoon. This keeps the sharp edges of the fragment from causing any serious pain, but I often still feel it when drying off after a shower or sliding up on a bar stool.  It also causes my hamstring to be permanently tight, which is affecting my lower back, hip alignment, and knee. After a long day on my feet, I walk with a limp. I am in pain every day and it will only get worse as I age.

Thomi and I both suffer from PTSD. My PTSD is worse than my physical injuries. I went through counseling and took medication. Neither helped. For the first 6 months following Route 91, I wasn’t sleeping more than four broken hours per night and had frequent nightmares.

I suffer from mental fogginess, lack of focus, and memory loss. I used to be quick witted and now I struggle to find words. I have a hard time getting out of bed everyday and don’t know why. Stress is a daily part of my job and PTSD has set my career back significantly. The PTSD has a negative impact on my relationship as well. We feel fortunate to have someone who knows what it’s like to experience what we did together, but at the same time we have our own separate struggles. We fight more often and are less intimate. We also have survivor’s guilt.

I have not let what happened to me stop me from doing what I love. I still go to concerts, festivals, and Seahawks games. I go, but sometimes it’s flat out terrifying. I constantly look for places to hide, exits, and shooters. I have fun, but I don’t enjoy these events care-free like I used to.  Loud bangs, helicopters, sirens, flashing lights, large crowds, people yelling or running, and anyone with aggression are all triggers and cause me to panic.

I try not to, but I think about Route 91 every single day and will for the rest of my life.

–Steve Dean is a paralegal in Bothell.

Having been in an abusive marriage for eight years, I know only too well that domestic violence and firearms are a deadly...