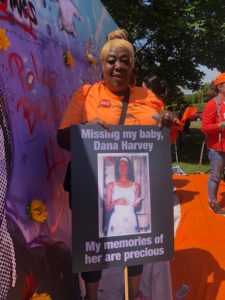 I was at church one January day in 2010 when I got a weird feeling. I knew something was wrong but I didn’t know what it was.

After church, I asked a friend to drive me to see my daughter Dana. When we got to her apartment, the door was locked and music was on really loud. That was when I knew something wasn’t right. I called the police right away. The moment the police opened the door, I knew Dana was gone.

Dana was a special child. At nine years old, she taught herself to speak Arabic. I couldn’t believe it. She was always gifted, but she struggled with depression.

For a time when she was a young adult, Dana was doing well. She started writing and she got her own apartment in Seattle. But eventually, the depression returned.

She started talking about suicide and I was afraid she had a gun. I was so worried she would hurt herself that I called the police and asked them to take her gun. They said there was nothing they could do.

In Washington state back then, law enforcement and family members like me had no tools to help keep guns away from people in crisis.

Since helping pass Extreme Risk Protection Orders in 2014, I have continued to fight for gun responsibility measures here in Washington because no one should have to live through the pain of losing a loved one to gun violence.

I will never forget that 4:00 AM phone call in September 2008—on what was the first day of school—telling me my son had been shot. I...