On Sunday, July 28, the Alliance for Gun Responsibility joined the State Innovation Exchange, FUSE Washington, and the Jewish Federation of Greater Seattle for a special gun violence prevention event to honor the significance of the day.

Watch KOMO’s coverage of the event.

Thirteen years ago, a gunman armed with two semi-automatic pistols and a heart full of hate entered the Jewish Federation of Greater Seattle and opened fire. He killed Pamela Waechter and injured five others.

In the years since, we have made tremendous progress on gun violence prevention laws here in Washington State, culminating with the passage of 10 laws this year alone. Eight of those laws went into effect on the 28th. 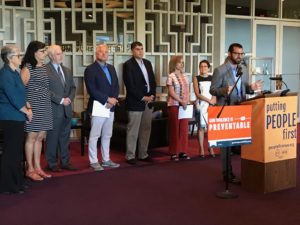 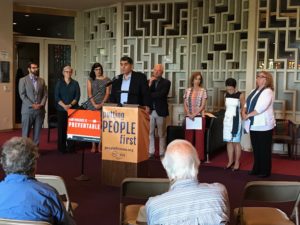 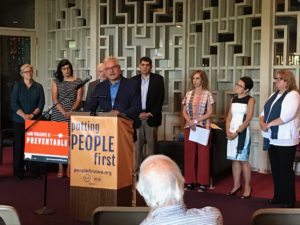 Legislative champions, survivors, advocates, and leaders of the Jewish community came together at Temple De Hirsch Sinai in Seattle to honor the victims, share stories of survival, and lift up the work of those leading the fight against preventable gun violence. The event was part of the Putting People First Tour, a series of events highlighting the progressives wins of the 2019 legislative session.

This morning we are commemorating the 13th anniversary of the shooting at the Jewish Federation of Greater Seattle and reflecting on the recent progress Washington has made on gun violence prevention.

Posted by Alliance for Gun Responsibility on Sunday, July 28, 2019

The powerful remarks concluded with Meredith Goldstein’s call to commit to continuing to honor the victims of the Jewish Federation Shooting, and all victims of gun violence, with action.

That commitment was strengthened as we received word later that day that in California and New York, two mass shootings left four people dead and another 22 injured.

–Maureen McGregor is the Strategic Engagement Director at the Alliance for Gun Responsibility.