The 2020 legislative session is officially underway! The whole Alliance team was inspired and humbled by the amazing volunteers that turned Olympia orange earlier this week. 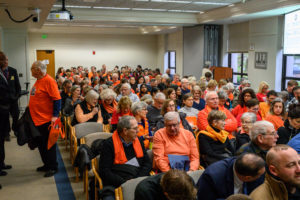 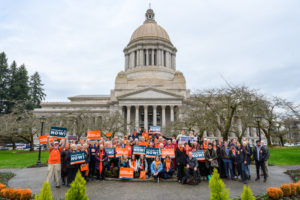 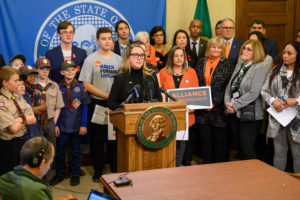 On Monday, supporters began lining up as early as 6 AM to attend – and in some cases, testify during – a Senate hearing on restricting high-capacity magazines. Gun violence survivors, doctors, and law enforcement all made the case that these deadly accessories have no place in our communities. Committee members agreed and this bill has already been voted out of committee!

After the hearing, the Governor and other elected champions joined us for a press conference calling on lawmakers to pass the policies outlined in our legislative agenda.

On Tuesday, we returned to the Capitol for two hearings, one in the House and one in the Senate, to hear legislation related to restoring local authority, regulating ammunition, and addressing the deadly intersection of alcohol and firearms. In all, eight gun violence prevention bills were heard this week.

But it’s not all good news. As we celebrate movement in Olympia, we are also responding to the spate of shootings that rocked Seattle this week and the everyday gun violence that continues to plague communities across Washington state, especially in low-income communities and communities of color.

Next week, bills concerning Vulnerable Adult Protection Orders and misdemeanor prohibitions will be heard in the House. You can keep track of all the gvp bills this session on our Legislative Session HQ page, which is updated daily.

In addition to committee hearings, we’ll also be in Olympia speaking directly to all of our elected officials. On Tuesday, we’ll be joining Grandmothers Against Gun Violence’s Lobby Day, on Wednesday, we’ll be joining Moms Demand Action’s Lobby Day, and we’re planning our own Lobby Day on February 14th. Be sure to sign up for our email list so you don’t miss any of these opportunities.

Thanks to everyone who helped us kick off the legislative session strong!

At the Alliance, we spend a lot of time talking about updating our existing laws and passing new laws to keep our communities safe from gun...