Our sixth annual scorecard is here! In 2015, the Alliance began grading Washington state legislators on their support for gun violence prevention. The scorecard measures each legislator’s commitment to reducing the number of gun deaths and injuries in Washington state as demonstrated by their votes, sponsorships, and advocacy. 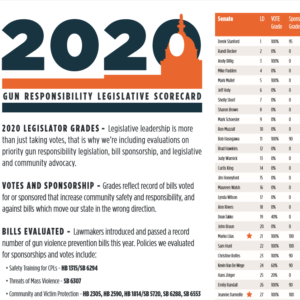 Check out the scorecard to see how your legislators did.

We have made incredible progress in Olympia in the last five years and it shows! For the second year in a row, a record number of legislators received A++ and A+ ratings. These champions proved their commitment to reducing gun violence by sponsoring and voting for crucial gun safety bills and by supporting community advocacy efforts.

But despite the commitment of our gun responsibility champions, the legislature failed to pass a bill to restrict access to high-capacity magazines once again. As the gun responsibility majority in Olympia grows, our opposition continues to dig their heels in. This disappointment and the continued opposition of gun lobby legislators is reflected in the record number of F and F- grades given this year. These legislators actively worked against efforts to keep our communities safe from gun violence.

— Dylan O’Connor is the Policy and Coalition Coordinator with the Alliance for Gun Responsibility.

Yes, It’s Time To Vote Again! Everything You Need to Know About The Washington State Primary

If you would like answers to your questions about voting outside of Washington State, visit our friends at Vote.org. This election will...